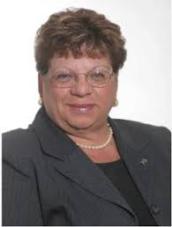 Jean Shipos is the Executive Director and Founder of the Teal Tea Foundation which is entering its 7thyear as a non-profit organization. She has been battling ovarian cancer since 1997 and organized the Foundation with family and friends to support and help other women.  Jean has been employed by Educational Testing Service, Princeton, NJ, for 32 years and is currently a Contract Manager with the General Counsel’s Office.  She is a cum laude graduate from  Ithaca College, Ithaca, NY where she earned a BA in English Education and holds an MBA in Global Business from the University of Phoenix online.  In her life before ETS, she was a high school English teacher.  She says that earning an MBA kept her focused on something other than cancer. “I was in my final MBA classes when I was diagnosed with a reoccurrence in 2003. Being able to keep busy and focusing on my studies helped me to face my second battle and chemotherapy.”  In 2004, she had the honor of being one of 7 people worldwide to compete in the Toastmasters International World Championship of Public Speaking. Her interests include Toastmasters, including mentoring in the Youth Leadership Program held annually at ETS; spending time with her family; traveling, and the Jersey Shore. “I was diagnosed with ovarian cancer in 1997,” she says.  “I knew nothing about ovarian cancer and didn’t know which way to turn, or how to get the support I needed. Family and friends motivated and inspired me.”  Together they formed the Teal Tea Foundation so that more women are aware of ovarian cancer.  The Foundation funds important research and awareness efforts.  “My goal is to fight for other women, including my daughters so that women are diagnosed earlier.  I fight so that no more women die from this disease.”  The Teal Tea Foundation offers a sisterhood of support and prayers for all women and a legacy determined to find.

We are saddened to share that Jean passed away on December 3, 2019. May she rest in peace.

To make a donation online or through the mail, click here.

Click here for the latest OC news, headlines, and information about clinical trials.